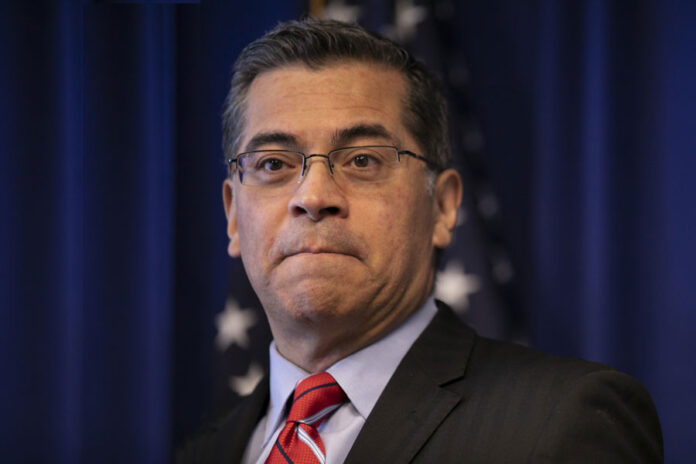 In a bold strike against Silicon Valley’s rideshare giants, state Attorney General Xavier Becerra used newfound enforcement powers to file a lawsuit Tuesday against Uber and Lyft for refusing to classify over half a million drivers as employees.

California’s top prosecutor and the city attorneys of Los Angeles, San Diego and San Francisco allege the gig companies’ behavior is robbing workers of wages and benefits while dodging their fair share of taxes used to protect workers when they get sick, especially as many drivers continue to work during the coronavirus pandemic.

Though the companies have openly flouted past decisions, Becerra’s lawsuit could hit the companies hard if the court orders them to dole out back wages, not to mention potentially hundreds of millions of dollars in penalties. The attorney general and city prosecutors say the novel coronavirus has brought about new urgency for drivers who have lost wages and continue to put themselves at greater risk of exposure from ferrying passengers in their vehicles.

“At the end of the day, no business model should hang its success on mistreating its workers and not playing by the rules,” Becerra said during a press conference.

Here’s what the lawsuit is about and how it might help drivers when they need it most:

Tuesday’s lawsuit is just the latest chapter in a long-running saga between workers and gig companies, specifically how workers should be classified in order to tap more job protections — and the right to unionize.

It all goes back to a landmark 2018 California Supreme Court decision, commonly referred to as the Dynamex decision, which created a strict test for certifying independent contractors. The court established a three-part litmus test for classifying employees, the highest hurdle being that the work must be outside the core of the company’s business. But even after the court ruling, gig companies such as Uber and Lyft resisted turning drivers into employees, saying it would upend their on-demand business models.

So labor-backed Democrats passed Assembly Bill 5 in an effort to codify the Dynamex decision and intensify the pressure on Silicon Valley flagships to classify hundreds of thousands of drivers as employees. Organizers say the gig economy exploits low-wage workers, which has only worsened income inequality in a global pandemic.

But instead of acquiescing, the gig employers and their supporters argued the Legislature was bought by Big Labor in refusing to adapt to workplace changes brought on by the sharing economy. Uber, Lyft, DoorDash were among those that refused to follow the new state law, vowing to go to the ballot box.

But AB 5 granted Attorney General Xavier Becerra and big city prosecutors enforcement tools, which is what they are now trying to do.

Back pay? Higher wages? How the lawsuit impacts workers

The state and cities have three demands.

First, they want Uber and Lyft to choke up all of the wages they would have paid to current and former drivers had they classified them as employees, entitling workers to minimum wage and overtime,  during the past four years.

Second, the lawsuit contends the companies violated California’s anti-trust law because misclassifying employees gives them an unfair advantage over companies who follow the law.

The state and cities want the companies to pay $2,500 for each act of unfair competition — presumably, for each driver — plus another $2,500 for violations against senior citizens or individuals with disabilities, which could add up to “hundreds of millions of dollars,” according to the San Francisco City Attorney Dennis Herrera’s office.

Finally, they ask the companies to stop classifying drivers as freelancers.

The lawsuit was cheered by Lorena Gonzalez, the Democrat assemblywoman from San Diego who authored AB 5, and labor leaders.

Will it be enough to protect workers during the pandemic?

The city attorneys repeatedly underscored the urgency of properly classifying drivers who are putting themselves at risk. When CalMatters asked if the lawsuit will provide relief to drivers before the pandemic is over, the attorney general and city attorneys didn’t offer a timeline.

In theory, the lawsuit could result in drivers getting benefits that would help them weather the coronavirus: paid sick leave, disability insurance and workers compensation. They’d also be entitled to unemployment benefits if they lose wages.

(Though gig workers qualify for unemployment benefits under the Coronavirus Aid, Relief and Economic Security (CARES) Act, many have been locked out.)

However, lawsuits tend to drag on and Uber and Lyft would have the right to appeal potential judgements against them.

Becerra admits the court systems are backed up as well. While many courts across the state have closed, the San Francisco Superior Court, where the lawsuit was filed, operates only in a limited capacity and has extended many of the timelines for filing paperwork.

For now, the attorney general could press for a temporary injunction that would compel the companies to classify workers as employees while the lawsuit continues to be heard.

How did Uber and Lyft respond?

“We are looking forward to working with the Attorney General and mayors across the state to bring all the benefits of California’s innovation economy to as many workers as possible, especially during this time when the creation of good jobs with access to affordable healthcare and other benefits is more important than ever,” the company said in a statement.

But Uber made it clear it won’t go down without a fight.

“We will contest this action in court, while at the same time pushing to raise the standard of independent work for drivers in California, including with guaranteed minimum earnings and new benefits,” the company stated.

It’s the same strategy that the company has taken repeatedly throughout the prolonged battle: increase driver perks, while refusing to classify them as employees. Feuer said he doesn’t buy the argument that drivers like the flexibility they get as independent contractors.

“There is nothing mutually exclusive about having workers flexibility and at the same time assuring that they receive the important protections they deserve,” Feuer said.

Jackie Botts is a reporter with CalMatters. This article is part of The California Divide, a collaboration among newsrooms examining income inequity and economic survival in California.

Igniting opportunity and setting the world in motion. We’re building something people use every day. From how you get home from work, to how you eat meals, or how you move huge shipments of absolutely anything, the work we contribute moves the world a few steps forward. And that’s one of the best parts about working here—knowing that the work you do helps shape the future.

BNA Vision: Here’s Some of the New Additions to Nashville International Airport

The Heat Is On, L.A. the Family That Invented Nashville Hot Chicken Has Arrived

Uber and Lyft ‘Cut Costs at the Expense of Workers,’ Says California Lawmaker